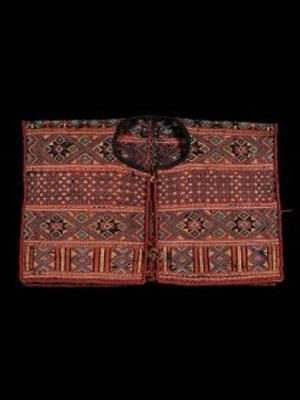 This male sleeveless jacket is a formal ceremonial costume with a round collar and symmetrical lapels stringed by two cords, but the parts under the armpit were not seamed, making it a very rare pullover type. It was sewed up by two pieces of woven clothes mixed with color linen threads like red, blue, white and green, and golden fibers of Dendrobium. Its front and back are both covered with intricate designs in geometrical symmetry including diamond pattern, 8-petal pattern, mountain-shaped pattern and line pattern. It is concluded that the costume of Pazeh Tribe, Pingpu Group had been used around 1910-1920, adopting the fiber of Dendrobium plant as clothing element as a partial continuity from the early clothing tradition of dagobum.
BACKTOP
:::
keyword： Discovering Taiwan   Dinosaurs