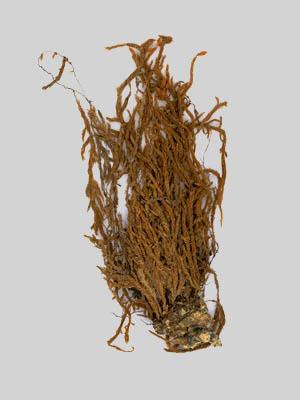 Taiwanobryum speciosum Nog.
It is a large-sized plant in grayish green and slightly glossy, grayish brown at the base. The main stem is creeping and extensive with scarce tiny leaves, while the branched stem is erect at a length of about 10 cm with irregular branches upright and scattered, full of leaves, arched when dry. Leaves shrink when dry and stand erect in moisture, shaped like a long oval with the upper part slender and lanceolate in the folded pattern. The leaf margin is smooth and slightly curly on the lower, wave-like on the middle and flat with rough teeth on the upper. The leaf midrib is elongated, taking 3/4 of the body, and ending before the tip. The leaf cell is long diamond-shaped or irregularly arranged like a long hexagon, transparent, tubercleless, thick walled, porous, smooth, wave-like sided, wider on the tip, which are longer and wider towards the base and narrower on the edge and corner, without alar cells. The sporophyte seta is about 1.5 cm long, light yellow and rough. The capsule is erect, long oval-shaped, yellowish, smooth and shrunken when dry. The peristome is a single layer with outer teeth lined like spike and elongated with dense tubercles. The spores have tubercles.

When this species was named, because it was collected in Taiwan for the first time, its genus name, Taiwanobryum, was formed by Taiwan as prefix and bryum as suffix. In the area of Taiwan, they are mainly epiphytes, but in Japan they are mostly gathered amid the rock piles. Thus, Taiwanobryum speciosum exhibits the general feature of subtropical epiphytes that in the northern temperate zone, its habitat is usually petrophytic.

This specimen was collected by Professor Chung-kuei Wang on February 15, 1960 in Anmashan of Heping Township, Taichung County at an altitude of around 2000 meters.
BACKTOP
:::
keyword： Discovering Taiwan   Dinosaurs