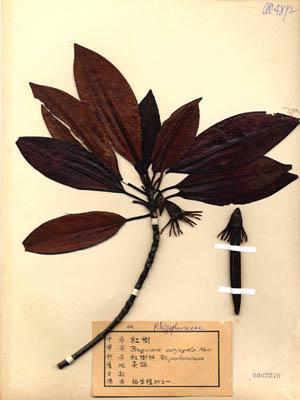 It is an evergreen tree, with grey-to-black bark. Its leaves are opposite on a long stem, leather-like and oval-shaped, pointed at both ends. With single axillary flowers, its calyx tube is red purple, shaped like a bell, about 8- 12-cleft with linear lobes; it has equal lobes, long-hairy on the tip, in petal and calyx with a 2-lobulate apex, multiple stamens, ovary inferior and conical fruits. Its flowering stage is between August and September. It bears viviparous fruits and numerous vertical supportive prop roots extending from the base of the trunk. It is mainly distributed in the tropics of Africa, Southeast Asia and Australia.

The earliest finding of Bruguiera gymnorrhiza in Taiwan was recorded in 1896 when Henry adopted the specimens of Playfair and his own gathering in Kaohsiung. In 1932, Yushun Kudo clearly described that this species was native to Sanmin, Qianzhen and Qijin of Kaohsiung where had been the best region to observe mangrove in early Taiwan. In 1958, a part of plants had been hewed down owing to harbor expansion but all the species had been preserved. Then Chin-hwa Hu collected specimens of Bruguiera gymnorrhiza in Kaohsiung and, in 1959, recorded 22 remaining plants there, which was the last record of this species in Taiwan, as a result probably from expansion of Kaohsiung’s second harbor. Presently, there is no more native Bruguiera gymnorrhiza in Taiwan and we can only look at the specimen to understand its form. From the tag, we know that this specimen was for display purpose without collection date, so its exact collection time is uncertain. We have inferred that it was a displayed botanical specimen after the Second World War
BACKTOP
:::
keyword： Discovering Taiwan   Dinosaurs