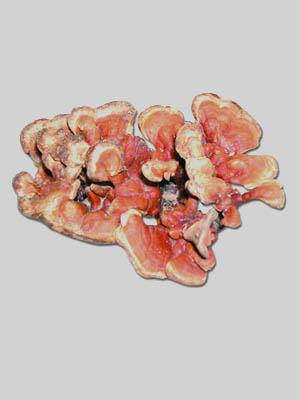 Ganoderma multipileum Hou
The Taiwan ling zhi is distributed over the tropical and subtropical regions of Asia including Taiwan, India, the Philippines, etc. In Taiwan, its habitat is limited in the lower-altitude area, at the base of broadleaf tree trunks like acacia. Its part near the ground bears sporophores and the back of pileus features reddish brown in lacquer-like gloss. Its form resembles G.lucidum that is distributed in the temperate zone of mainland China, but they differ totally in the climate conditions of habitats, which could serve as an essential basis of classification.

The specimen of Ganoderma multipileum Hou collected by the Museum was gathered by Mr. Yu-fei Yu in 1949 near the Taichung Park, which was further studied by Mr. Ding Hou in 1950 and presented the thesis of a new species, which was published as the article, “A new species of Ganoderma from Taiwan,” in Quarterly Journal of the Taiwan Museum. And this specimen has been displayed at the long-term exhibition of the Museum for educational purpose. In 2007, according to the reexamination of this specimen by scholars Sheng-hua Wu and Dong-mei Wang, Ganoderma multipileum was confirmed as a new species from Taiwan and this specimen had been designated as the holotype.
BACKTOP
:::
keyword： Discovering Taiwan   Dinosaurs