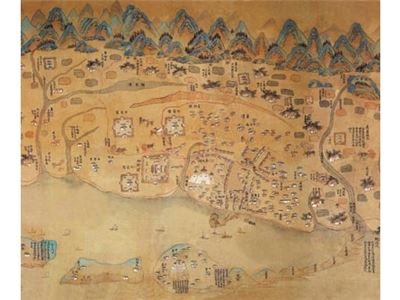 Antique Map of Taiwan during the Kang-Xi Period

L: 536 cm × W 66 cm , 1699-1704, Qing Dynasty
The Antique Map of Taiwan during the Kang-Xi Period is the oldest existing Chinese map on a single colored scroll depicting the entire Taiwan. Completed  with ink and color on silk, it has a horizontal length of 536 cm and a vertical width of 66 cm. Originally called The Genre Painting of Taiwan Aboriginal Peoples, it is possibly the most reprinted and widespread painting among antique Chinese maps of Taiwan. It had once been dated in 1722, the 61styear of Kangxi, when the first Imperial Emissary of Taiwan Huang Shu-jing had commissioned this painting to be presented to the Qing government. Since the Japanese period, many findings have indicated an earlier date before the arrival of Huang Shu-jing from the depicted contents of the map. For example, the Qing dynasty had moved the capital of Zhuluo county from Backloan (present-day Anding and Shanhua, Tainan) to Chiayi in 1704, but on the map it is still situated in Backloan. This means the map should have been painted before 1704, at least impossibly as late as 1722. Recently, based on many similar clues, the academia has generally agreed that this map should be dated between 1699 and 1704.

This map was painted by traditional Chinese landscape technique, realistically depicting the scenes of western Taiwan from north to south at the turn of 17th and 18th centuries with motifs of topography, administration, military bases, roads, urban and rural life, etc. It is indeed an epitome of Taiwan’s socio-cultural life and geographic knowledge in the early Qing dynasty, comprising features of map, armament painting and genre painting concurrently. The entire map is painted with delicate brushwork and exquisite coloring, celebrated as the champion among antique maps of Taiwan and also unanimously the greatest Museum Treasure of the National Taiwan Museum.
BACKTOP
:::
keyword： Discovering Taiwan   Dinosaurs