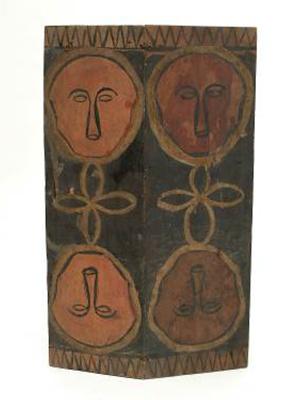 L 59cm × W 36cm , Late 19th Century to Early 20th Century
The indigenous shields of Taiwan are affiliated with those of Austronesian peoples in Southeast Asia. According to the classification by Prof. Chi-lu Chen among Taiwan’s indigenous shields, those of Yami Tribe are plain-board type, and those of Amis, Paiwan, Bunun and Tsou Tribes are roof type. The Paiwan roof-type shields usually are neatly patterned, and most of the existing ones have been held by the nobles, which are colored, painted or shallowly carved with honorable decorations like human-head pattern, hundred-pace snake, geometric design, animal pattern, etc. The pattern is usually laid out in symmetry with a distinctive filling effect. More than a defense weapon, it is often used in important annual ceremonies to manifest the social status of the nobility.
This wooden shield is rectangular, jointed with two planks by rattan as a mountain shape (roof type) and attached with a wooden horizontal handle in the back, which is held by the left hand. The carved surface area is colored in black to be three-dimensional and four human heads are patterned in a circle around the center, featuring human hair as outward half-concentric extension. In the center of the shield surface is a compound-curve design transformed from hundred-pace snake with the upper and lower margins in a band of saw-like pattern. The patterns are laid out very neatly and exquisitely, and it is very rare to see the design of circle-shaped human heads and the effect of compound-curve pattern. For Austronesian peoples of Southeast Asia, there are also eye-catching carved wooden shields with ferocious, ghastly forms designed to bedevil the enemies. The decoration of Paiwan wooden shields may have the same intention, but as the integration of nobility system and ancestral worship, it might be similarly important to manifest the social power of the nobility.
BACKTOP
:::
keyword： Discovering Taiwan   Dinosaurs