National Taiwan Museum, established in 1908, is the oldest museum in Taiwan. The Japanese government wanted to commemorate the opening of the west coast railway and so established the Taiwan Governor Museum on October 24, 1908. At its opening, there were more than 10,000 pieces of collections in the museum. In 1913, funds were collected to build the Governor-General Kodama Gentaro and Chief Civil Administrator Goto Shinpei Memorial Museum at current site. In 1915, after two years of construction, the museum was completed. It is one of the most noteworthy public buildings in Taiwan. 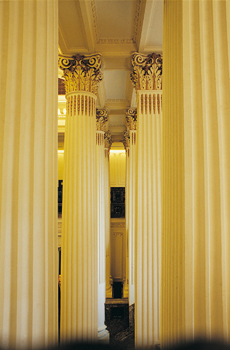 After the relocation of the National Government of the Republic of China to Taiwan in 1949, the museum came under the jurisdiction of the Provincial Department of Education and its name was changed to Taiwan Provincial Museum. In 1961 and 1994, the museum was closed forextensive renovations. In 1999, the museum came under the supervision ofthe central government and renamed as National Taiwan Museum.Although its name has changed thought out the times, the museum is the only museum built in Japanese colonial era that, after wars and changes in government, remains open at its original site.

The museum was designed by Japanese architect Ichiro Nomura and Eiichi Araki. The construction was carried out by the company Takaishi Gumi. The structure itself is reinforced concrete (RC) with load-bearing brick walls. RC was an advanced technology in the early 20th-century in Taiwan. The roof was made of cypress and covered with copper tiles. 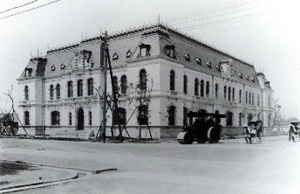 With its Greek temple facade and Pantheon-like vaulted ceiling, the museum was constructed in classical style. The building can be divided into three parts: the base, the walls, and the roof. The base is raised for a bigger room on the first floor and lend majesty to the structure. The walls are composed of columns, with Renaissance-style windows. The roof is a dome and the gable is decorated with gorgeous flower and leaf patterns. These, together with the huge classical Doric hexastyle columns supporting the portico, create a solemn and sacred atmosphere. From a distance, the 30-meter-high dome appears to float above the surrounding trees and becomes the center of attention.

Walking into the museum, you will find an elegant Renaissance-style hall. In Taiwan, it's hard to find a building that the interior and exterior are done in different styles. This is called eclecticism, an approach that involves various paradigm by need. The main hall of the museum is surrounded by 32 Corinthian columns whose capitals boast exquisite acanthus and volute patterns. The grand staircase at the main hall is also eye-catching.

Looking up at the 16-meter high ceiling, the light spills evenly through the stained glass windows between the double vaults into the hall. This design is similar to that of a Gothic church where light and shadow create a sacred atmosphere. At the time the museum was built, bronze statues of Governor-General Kodama Gentaro and Chief Civil Administrator Goto Shinpei were placed in the alcoves of the lobby. A pattern combining the family coat-of-arms of the two officers was used in the stained glass and lamps, showing the commemorative purpose behind the building of the museum.The exterior wall is decorated with washed pebbles to imitate the texture of stone architecture. The stairs and handrails of the interior are of marble imported from Japan. Black marble and white calcite were used on the interlaced floor, making Taiwan a pioneer in using marble as the main building material. Splendid clay sculptures were installed around the interior doors and windows as well as in alcoves. In addition to popular European floral patterns, these sculptures also showcased Taiwanese elements such as the wax apple, banana, and star fruit.

For over a century, the museum has been standing in front of the Taipei Railway Station, on the north-south and east-west pivotal crossroads of old Taipei in Qing dynasty. Its elegant architecture, rich collection, and unique geographical position have made the National Taiwan Museum an important landmark in Taipei. In 1998, the Ministry of the Interior designated the museum as a National Historic Site. From the colonial-era Taiwan Governer Museum to the National Taiwan Museum today, the building has witnessed the history of Taiwan and also recorded the natural and anthropological development of this land. At the museum, visitors can witness the tracks of development and the many splendors of Taiwanese culture, geology, flora, and fauna.

Today, the museum retains the scale it had when it opened. The collection and research continue to focus on the research of anthropology, earth sciences, zoology, and botany. Through themed exhibitions, educational activities, publications, and various cooperation plans, the museum has achieved its educational goal in the society to welcome and serve the public.