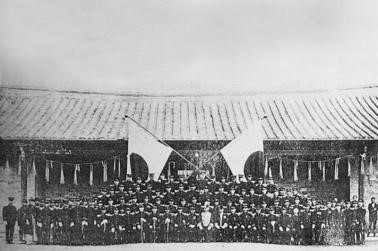 The Railway Department of the General Governor of Taiwan, a National Historic Site, is located at Zhongxiao West Road, Tacheng Street, Zhengzhou Road and Yanping North Rd. It is under the jurisdiction of Taiwan Railways Administration. In 1884, Liu Ming Chuan, Governor of Taiwan hired specialists from England and Germany to build the Machinery Bureau around the pier of Tamsui River for the making of weapons like guns, canon, bullets and gunpowder. Iron-melting room and blacksmith factory can be found in the Bureau. In 1895, the Japanese Military took over the Machinery Bureau and changed it into Taipei Weapon Repair Center, a place that produces bullets, proximity fuze, gun magazines, watercraft, railway and iron bridge. Later, it was called Taipei Artillery Factory. In 1900, the Ministry of the Army (Japan) handed it over to the Railway Department and was renamed as Taipei Railway Factory in the same year. In 1908, the west coast railway line was opened to traffic, which resulted in an increase in traffic and repair of vehicles. In 1909, the Taipei Railway Factory was expended to the east. Vehicle repair workshop and lacquer workshop were built. In 1915, the original buildings at the south of the site were torn down. The Office of the Traffic Bureau was finished in 1918. Taipei Railway Factory is in the north and the Traffic Bureau is in the south. Until Taipei Railway Factory was moved to Songshan (now Taipei Railway Workshop) in 1934, there were nearly 40 buildings in the Factory. After the construction of the MRT in 2005 and the teardown of historic sites in 2013, there are 10 left and 8 of them are cultural heritage by law.

In May1918, the first part of the Railway Department Office was finished, which replaced the original yamen used by the Machinery Bureau in Qing Dynasty. This part of office was used by subordinate officers. The Railway Department Office is made of bricks and wood. The floor slab of the hallway is made of track and concrete. Two towers stood at the entrance. The building is arc-shaped because of its location at the intersection. Three classic pillars are placed at both sides. A veranda is on the second floor, which is 2 meters in width and supported by dual pillars. A large ox-eye window is placed on the tilted roof. On the main hall, the ceiling is curved and pillars are placed to separate the space. Walking up to the second floor on a wooden stair and you can see the ceiling and the wall are decorated with plaster sculptures. The ceiling is also arched, which is rarely seen in Taiwan.

The cafeteria is combined by the cafeteria for staff and the Office of Manager and Accounting. The cafeteria for staff was built in 1932. It's a two-story wooden western style building and the designer is unknown. It could be designed by the Construction Division of The Railway Department or technician Kuriyama Shunichi from the Maintenance Division of Taiwan Governor's Office and operated by Konta Ryuutarou. The Office of Manager and Accounting was built in 1941, which is also a two-story wooden building. The designer and builder are unknown. The office was connected to the cafeteria with a stair. The metal brackets of the roof are delicate. The wood used for construction is second hand material from other buildings. The ceiling and the exterior is plaster wall texture from Germany. The German style weather-boarding at the exterior wall is a key feature. 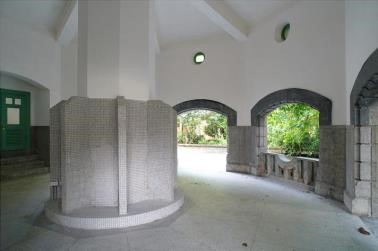 The one-story historicism architecture was built in 1919. The staff were mainly male, so that's why it's a male wash room. Slate roof tiles are used on the roof. The main structure is hallowed octagon pillar with reinforced concrete. There's a wash room vent above. Eight reinforced concrete beams were connected like an opened umbrella. Eight urinals were placed accordingly. Two toilets with doors are located at both sides. The outdoor septic tank was placed behind the toilets. The washed pebbles and lines on the exterior wall was intended to imitate the classical stone structure. 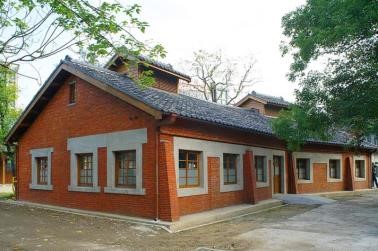 The room was built before 1925 and was used for providing power for machinery or electricity storage. After several times of reconstruction in accordance with the Office at south and Factory at north, the room is twisted in shape. The room has pilasters and bearing wall made of brick, wooden truss roof, with a window for ventilation and heat dissipation. 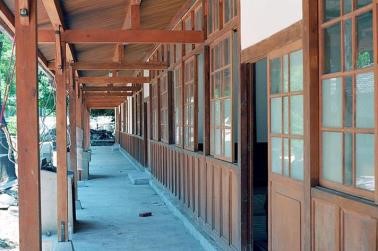 It should be built after 1934 after the relocation of Taipei Railway Factory. It's a Western style one-floor wooden structure. 44 meters in length and there were many window, focusing on natural lighting. The room was first used as the administrative room for construction department and undergone at least three times of construction of partition wall. The bottom is a concrete ant-proof foundation, a weather-boarding and plaster wall is placed in the middle. It has a hipped roof with pantile. 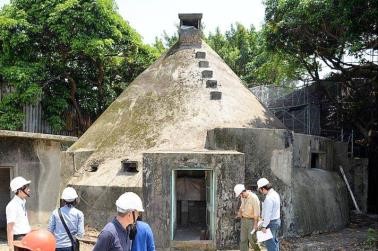 It's located on the northwest side of the park. Built in 1943, designed by assistant technician Dori Yoniru from the Construction Division. This is an emergency shelter for senior level staff made with reinforced concrete. There are two parts, the upper part is 7 meters above the ground. The cone shape is to avoid bomb. The protection wall on the surface was added because of Chinese Civil War. The explosion-proof iron door is at the entrance, the lower part is buried in the ground. The railway map of Taiwan can be seen on the wall, including stations, bridges, rivers and tunnels. There's a vent that connects to the ground.

7. Relic of The Machinery Bureau in Qing Dynasty

In 2006, the relic was found because of the construction of MRT Songshan line. The wall made of stone is 2 meters high. The sandwich wall comprises two stacked stone, clay and pebble stone in the middle. Later, a flagstone path was found 60cm underground. In every 50cm, there's a stone slate placed in the north-south direction, which is the size of the stone for a defensive wall. Pebble stones are paved in between. The style of pavement is the same as the one in old pictures. It was from the similar building of The Machinery Bureau when Self-Strengthening Movement was promoted by Liu Ming Chuan. 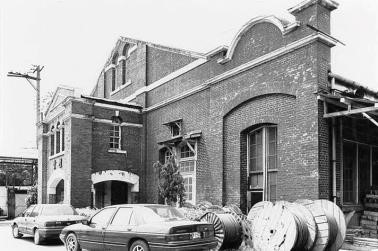 Formerly named as Vehicle Repair Factory, it was built in 1909 with 24 meters wide. Facing the area of the Factory in south and Dadaocheng in the north, the tower and the gable illustrate the historicism style of the building. A window for ventilation and heat dissipation for the factory was located behind the curved gable. In the east and west side, there are six load-bearing brick arch walls with six tracks for the passing of vehicles that comes for repair. The roof truss of the gable roof is 17 meters long and is a western styled rail truss. When Self-Strengthening Movement was promoted by Liu Ming Chuan, the authority bought the abandoned railway from Europe. It's the first generation of steel scaffolding of the Dadaocheng Taipei Station that applied the technique of thermite rail welding with rivet. The roof was covered with zinc tile. After WWII, the factory was changed into an assembly hall of Taiwan Railway and a classic arcade with gable was added in the hall. The window for ventilation and heat dissipation was knocked down and replaced by a gable. After the Taipei Railway Underground Project, Civic Boulevard was being constructed and the two towers at the north side and the two arches were knocked down. MRT Songshan line was designed to pass abode the assembly hall. For the need of construction, the Department of Rapid Transit System bought the land from Taipei Railway in order to tear down the assembly hall. After investigated by scholars, they thought that the building bears the memory of Taipei Railway staffs. The Department of Rapid Transit System agreed to clear the area and find out the original track used for vehicle repair and the roadbed made of pebble and concrete. Parts of the roadbed were kept and some were kept with the technique of fiber-reinforced plastic molding.