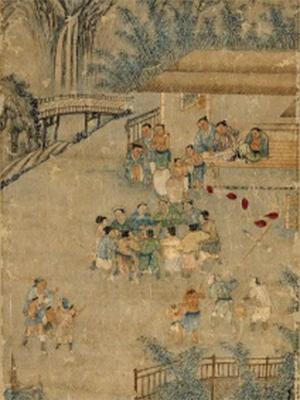 Hsu Shu , Colors on Paper , 1820, Qing Dynasty
This series of paintings are titled The Genre Paintings of Taiwan Aboriginal Peoples’ Customs, comprising four pictures, which were painted by Hsu Shu of the Qing dynasty in December, 1820. They depict various customs and lifestyles of the Pingpu Group of western Taiwan during the early Qing dynasty (the 18th century). According to The Paintings and Calligraphy in the Museum Collection by Xun-yao He, Hsu Shu was from Wuyi, Zhejiang, alias Xianzhe or Yanji. These paintings are long vertical mounted scrolls. The contents of four paintings cover ten themes. The first depicts crossing the river and catching fish. The second depicts household and weaving. The third depicts rice fields, husking rice and teaching. The fourth depicts ceremonial dance, picking betel nuts and nose flute.

Stylistically, Hsu Shu’s The Genre Paintings of Taiwan Aboriginal Peoples’ Customs should be seen as one version among many series of Pingpu-Group genre paintings created in the early Qing dynasty. This kind of aboriginal genre paintings depicting diverse customs of the Pingpu Group of western Taiwan is usually done in the manner of “standard sets” that reflected the stereotyped “savage customs” in the eyes of Han Chinese at that time. The presently existing aboriginal genre paintings include different versions from many periods but their contents are generally identical with minor differences, probably resulting from shared copies and imitation. Among them, there is a rather famous version, Liushiqi’s Genre Paintings of Taiwan Aboriginal Peoples, painted in 1744 under the command of Liushiqi, an Imperial Emissary of Taiwan. These genre paintings as records of Taiwan’s customs and folk life back then have become today our important graphic documents to understand the life of Taiwanese people in the mid-18th century.
BACKTOP
:::
keyword： Discovering Taiwan   Dinosaurs