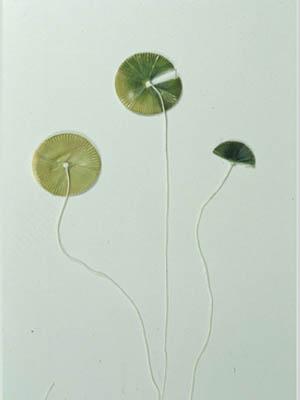 Is there really hair growing on the rocks? This is a kind of relics from Acetabularia major, a species of marine Chlorophyta (green algae). Acetabularia major comprises a long stem with one to multiple layers of round umbrellas on the top. In Taiwan, its major habitat is the Hengchun Peninsula, usually growing gregariously in the shade of reef hit by medium waves. When the plant is dried up, its umbrella falls off but the long calcareous stem is still attached to the rock, creating an amazingly interesting appearance like a white-haired rock.

The body of Acetabularia major is bright green like an umbrella about 1-7 cm tall. The umbrella is formed by interconnected sides of 60-85 radial branches with gametangia, highly calcific. After it dies and its umbrella comes off, its long stem with calcium still adheres to the rock like white hair. The stem is long and columnar with the irregularly branched rhizoids protruding on the lower as appressoria. A perennial plant, it is single-nucleate when young and becomes coenocytic in maturity, with a small chloroplast in the shape of oval or disc

Acetabularia major is usually gregariously living in shallow waters or the shade of reef hit by medium waves. Its growth period is from January to May and its number is very small. It is mainly distributed over the tropical oceans, native to Taiwan, Japan, the Philippines, Singapore, Indonesia, etc.
BACKTOP
:::
keyword： Discovering Taiwan   Dinosaurs