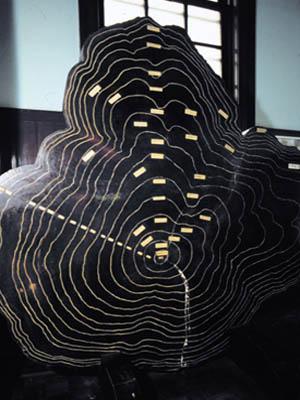 Annual Rings of the Formosan Cypress from Alishan: An Epoch-Marking Giant Wheel

The Formosan cypress is an evergreen tree growing in the mountains at an altitude of 1700-3000 meters, an endemic species of Taiwan and also the tallest tree of East Asia. Most of the giant trees in Taiwan’s mountain forests are Chamaecyparis formosensis. The genus Chamaecyparis can only be found in Japan, Taiwan and North America as precious living fossils remaining from the Tertiary Period. The foggy woods formed by Formosan cypresses in Taiwan are even rare worldwide, qualified to be the top-class global natural heritage. The Formosan cypress wood has light color of red and soft but firm texture. It is commonly called thin skin owing to its slimmer balk, while the often-mixed Chamaecyparis obtuse is commonly called thick shell. These two Chamaecyparis species endemic to Taiwan are both strongly aromatic and insect-resistant, which are the best wood qualities with high economic value, considered as the first-class precious conifers.

The specimen of Chamaecyparis formosensis collected by the Museum has remained since the Japanese Period, with a diameter of about 200 cm at an age of around 800 years depending on its growth rings. Through calculation and marking, it functions like a giant wheel of time to record an epoch and had been one of the important displayed objects in the early permanent exhibition of the Museum. Other displayed specimens of wood identification were also early significant subjects, representative of the tree species native to Taiwan such as Chamaecyparis formosensis, Chamaecyparis obtuse, Taiwania cryptomerioides, Cunninghamia konishii, Calocedrus formosana, Michelia compressa, Diospyros discolor, etc.
BACKTOP
:::
keyword： Discovering Taiwan   Dinosaurs